Introducing Alliance Airlines' ‘Pink Lady’, supporting Australians affected by breast cancer: This month, Alliance will officially launch the latest addition to our fleet of aircraft in support of Australians affected by breast cancer. Alliance’s Pink Lady will redefine ‘pretty in pink’ as she flies in her Breast Cancer Network Australia (BCNA) livery, designed by Lila Design, throughout Australia. She will depart from the UK and fly to Australia soon. More info at bcna.org.au. See also our portfolio.

Alliance Airlines today announced its intention to significantly expand its fleet in the Northern Territory from one aircraft to four. The three additional Fokker jet aircraft (2 x F70 and 1 x F100) will join an existing 100 seat Fokker 100 aircraft to round out the Darwin based all jet fleet. The additional aircraft will come into service between July and December this year. Alliance opened its Darwin base in February 2018 with the stated intention of expanding that commitment when the time was right. Advertisements for additional Darwin based staff have been placed in today’s national newspapers and on-line employment sites.

Scott McMillan, Managing Director Alliance Airlines, stated “That this expansion continues the growth Alliance has undertaken since 2002. Alliance’s operations are now based in Adelaide, Brisbane, Cairns, Darwin, Melbourne, Perth, Townsville and Rockhampton. Alliance has always committed to employing a local workforce, engaging with local businesses and becoming a contributing member of the local community just as we have shown in the Northern Territory over the last 15 months.”

Mr McMillan went onto state, “Since our inception Alliance has grown to being the largest contract aviation operator in Australia, concentrating on the three key parameters of safety, on time performance and financial sustainability. Our on time performance and engineering dispatch reliability are industry-leading, resulting in long term customer loyalty. The requests for additional contractual business has grown to the point where we are confident that the Darwin operation can be significantly and viably expanded.”

In addition to contract services ex Darwin, Alliance has been providing services to Uluru for inbound tour operators, Tauck (for the past seven years) and JTB (for the past twelve months). These tourism services operate from, Melbourne, Brisbane and Gold Coast and to Cairns. Later this month, Alliance will also commence a tourism service for JTB from Perth.

In addition to tourism services, Alliance also operates two flights per week between Brisbane and Alice Springs on behalf of Virgin Australia and one service per week in support of the mining sector.

Alliance is in ongoing dialogue with the Northern Territory Government, individual communities and resource companies.

We define niches, names, create beautiful and aircraft exterior paint scheme designs, airline identities and brand, label, pack designs for alcoholic drinks brands. Simply put, we help our clients visually express their brands positioning & attributes wherever consumers, business relations and friends interact with them. We believe that brand package and bespoke tailored aircraft livery design are the foundation of effective brand presence and unique personal representation. We make designs according to the trends of the day or as an echo from the past, but our heritage of service and our commitment to putting each one of our global clients first are constant.

The scale of operations provided by the mining and tourism work will also enable Alliance to commence scheduled services from Darwin in the future. Mr McMillan said, “There are a few routes that are of interest to Alliance, which will both tie up our National network and provide greater access to air services for the people in Northern Australia.”

Mr Michael Gunner, Chief Minister of the Northern Territory said “More flight options mean greater choice for Territorians and greater competition, which we welcome. We look forward to continuing to engage with Alliance about their plans to further expand their operations in the Territory”. As part of this expansion and to commemorate a significant Australian aviation event, Alliance will be painting a special livery on the last F70 to be delivered to Darwin from Europe in December this year. That livery, designed by the world acclaimed Netherlands design house Lila Design, will commemorate the 100th anniversary of the arrival of the first aerial flight from England on 10th December 1919.

At 3:40pm on December 10 1919, Ross Smith landed the “Vimy” at Port Darwin’s Fannie Bay airfield—exactly 27 days and 20 hours after departing Hounslow airfield in London. The Great Air Race had been won, as had the 10,000-pound Australian Government prize. The crowd at Fannie Bay was overcome with excitement!

Hudson Fysh and Paul McGinness, representing the Australian defence department, were the first to officially welcome the four airmen.  On 16 November 1920 Fysh and McGinness with grazier Fergus McMaster founded Queensland and Northern Territory Aerial Services Ltd (QANTAS). No doubt inspired by the heroic achievements of the Vimy crew, the previous year. The crew of the aircraft, listed below, are commemorated on the Ross Smith Memorial at Fannie Bay in Darwin: 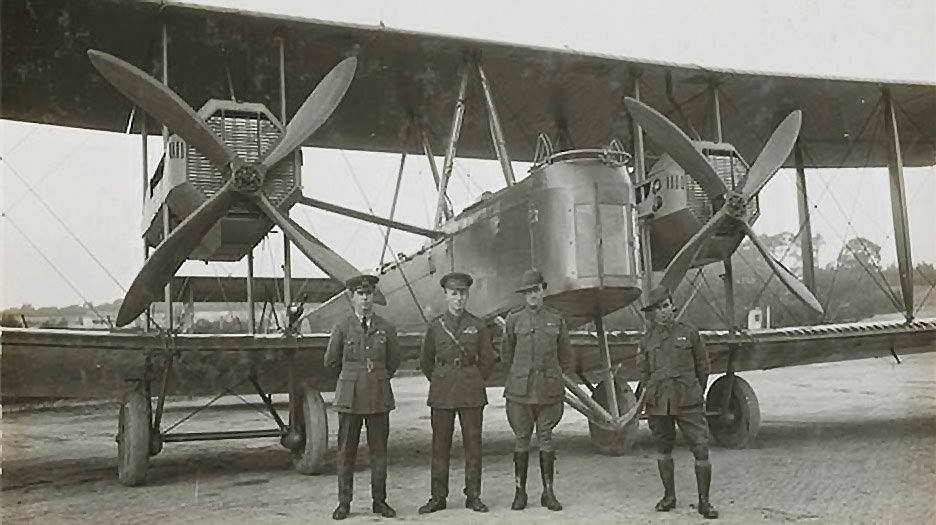 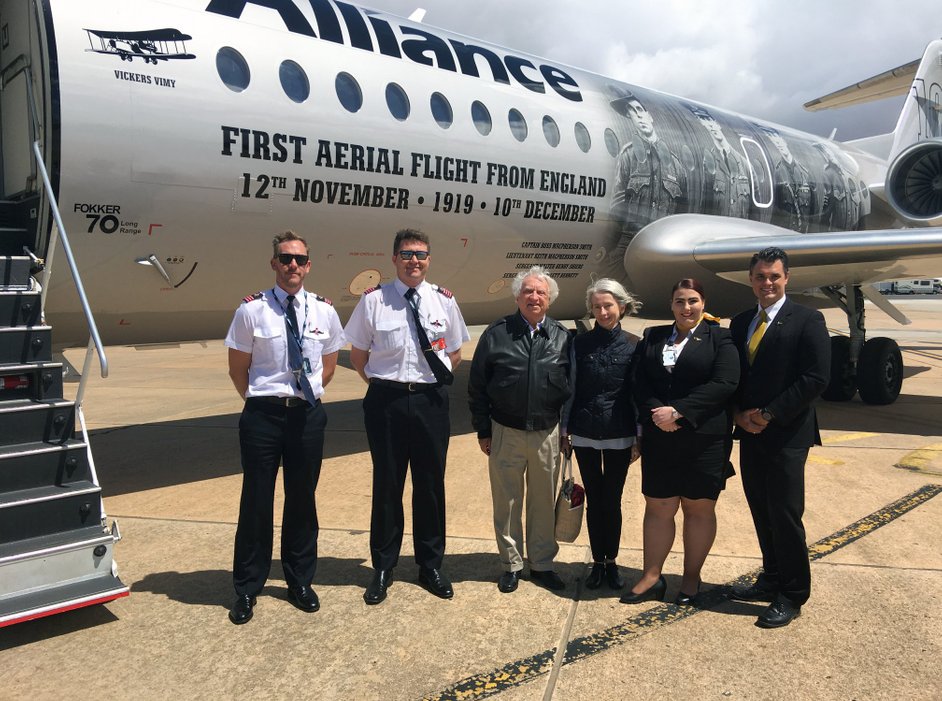 First official presentation at the RAAF Edinburgh Air Show 2019. Pictured: Alliance's crew with Steve Padgett, Chairman and his wife Lorraine after delivering VH-QQW to the RAAF Base Edinburgh.